Red Velvet Cupcake, the Stuff Dreams are Made of.

A customer messaged me recently…

“Hi Allyson! … I know this is a weird question but do you still make your cupcakes? I live in Cincinnati now and not sure if you ever share your recipe but the only one I dream about almost weekly lol is the red velvet one. I’ve tried to make my own version but nothing compares to yours. Let me know if you’d be willing to share, I’ll sign like an NDA or pay you for it lol. “

Well folks, here it is. Back when I had my cupcake stores, this Red Velvet Cupcake was an everyday flavor. Only the best of the best made a daily appearance. Red Velvet was one of them. (In case you’re curious about my best selling cupcake flavor, I’ve dedicated an entire post about it here. ) The cupcake racked up easily over $100,000 in sales over the years. It was an obsession among loyal customers, and for good reason. This cupcake was all the things, moist and lightly chocolaty and topped with that signature buttercream addict frosting.

Pecan Praline topping to die for!

For the first few years I sold this cupcake just as described, until one day I had a new customer walk in. She told me she had just moved to Kansas from Georgia and was looking for a really good red velvet cupcake like her grandmother made. She tried mine and declared it “almost perfect”

She went on to tell me that in the south a real red velvet cupcake has chopped pecans on top.

Oh how I love feedback like that! I got busy testing a recipe for a candied pecan praline. Its lightly salted and buttery sweet with toasted chopped pecans. I sprinkled it over the top and declared it a win. I couldn’t wait for her to come in and try it for herself.

It didn’t take long, I mentioned she was a regular. And by regular I mean several times a week. I happily offered her one and SHE APPROVED! From that point on, the Red Velvet Cupcake was topped with pecan praline and it sky rocketed to my number 4 best seller of all time.

But what about the buttercream?

If you’re a bakery owner or even home baker than you’re probably familiar with these laws against using cream cheese in frostings. It seemed a little hard to satisfy a customers request, and I knew this cupcake needed an extra special frosting. I stumbled upon this wonderful flavoring oil manufactured by a company called Loranne Oils. Their Cheesecake flavored oil gives my buttercream a little something that the Red Velvet Cupcake deserves. While its not exactly like a cream cheese frosting, it seemed to do the trick and satisfy not only my customers, but the health department requirements as well!

Putting it all together

Since there are several elements to this cupcake, I like to break it up and prepare the items over a few days.

The first step is to make the pecan praline topping.

This recipe makes more that you’ll need for the cupcakes, but it keeps well and tasted great on ice cream, and even as a topper on a big salad with lots of greens, goat cheese, dried cranberries and crunchy sweet pecans. Voila, salad and cupcakes? The perfect meal!

Next you’ll want to mix the cake batter.

When I was selling 100’s of cupcakes a day, we mixed our cake batter the night before and just scooped up what we needed over then next few days. I was always happy with the way the batter held up. If you’re looking for time saving tips this is a good one. Breaking the process into smaller steps helps keep things clean and organized!

A note about the red food coloring: you want the liquid stuff. Don’t be tempted to use the paste color that you might use for coloring buttercream, the liquid red gives this batter just the right amount of color. 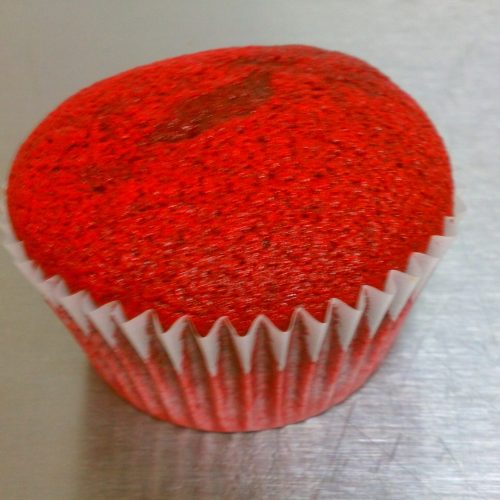 Time to make the frosting!

There is so much to say about this frosting that I’m working on writing an entire post to it. I’ll link it here when its done, but suffice it to say, this buttercream is the out of this world. Don’t believe me? I even had special parking signs for my loyal customers who just couldn’t get enough of this stuff. One woman would order it by the pint…WITH A SPOON!

So I’m not saying eat this right off a spoon, but if you did, you most definitely wouldn’t be the first! 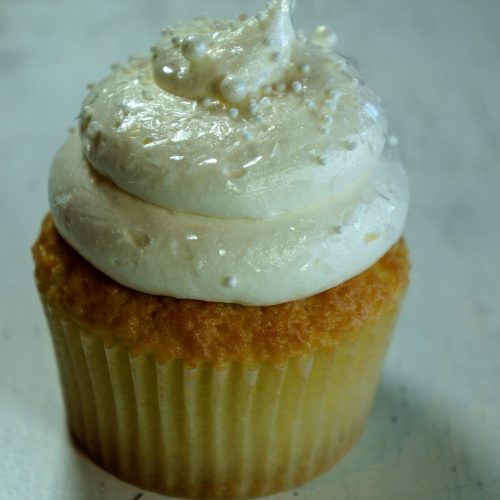 Putting it all together

Now that you have your praline, your cupcakes and your frosting, its time to make the magic happen and combine these lovely flavors together.

Place the star piping tip into your pastry bag and fill it up with buttercream. Now frost the cupcake with as much or as little frosting as you like. I like to celebrate the frosting and make it the star of the show, so I tend to make my cupcakes with equal amount of cake and frosting. ( 2 oz cupcake, topped with 2 oz buttercream if you want to get technical)

Sprinkle them with a little praline topping, Red Velvet cake crumbs and top them off with a dusting of cocoa powder.

If you make this cupcake, be sure to share it on social with #betterbakerclub. I can’t wait to see and hear all about your creations!

My guided course helps you research the different elements of opening a cottage foods bakery.